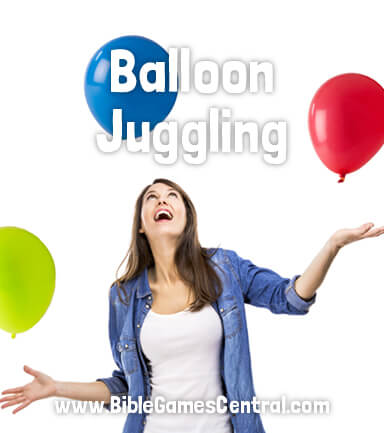 Keep as many balloons in the air for as long as possible and learn about Jesus’ perspective on busyness. 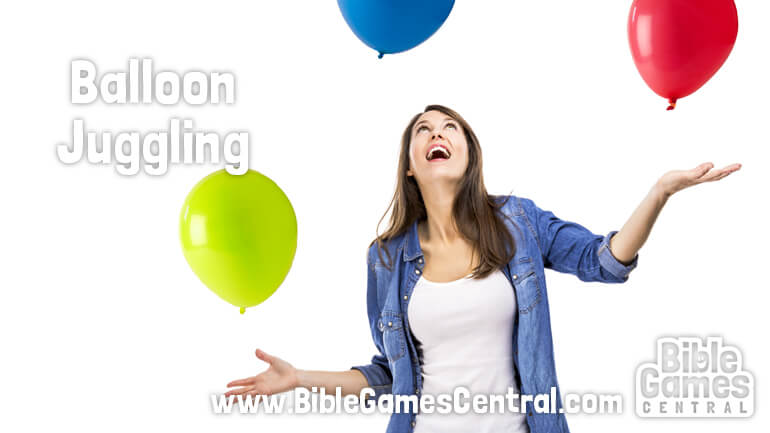 Blow up balloons. (Alternatively, get the players to blow them up just before game begins.)

Don’t force anyone to play. Be aware that some (even adults!) may be terrified of balloons; allow them to sit as far back as possible during the game.

This game is played individually with players taking turns.
If your group is too large, split into smaller groups.

Give the first player 2 balloons.
On “Go”, start the timer.
The player must start to juggle the two balloons.
Players may use any part of their body to keep the balloons in the air, but the balloons must not rest on their body or be held.

After every 10 seconds, throw in one additional balloon for the player to juggle.
The player tries to keep all balloons in the air.
Stop the timer as soon as one of the balloons hits the ground.

It is the next player’s turn to try.

The player who manages to keep as many balloons in the air for the longest time wins.

You can play for as many rounds as you want.

Get Started
1. In what ways does your life feel like you’re juggling balloons?
2. In what situations do you feel “pressure”, “stress”, “worry”, and “frustration”?

Get into the Word
Read Luke 10:38-42
3. Who do you identify more with, Mary or Martha?
4. Why is Martha so upset and frustrated?
5. What are the strengths of being a “Martha” in life and ministry? What are the weaknesses?
6. If you were in Martha’s shoes, how would you handle the stress?
7. What do you think about the way Jesus reprimands Martha?
8. Is it possible to serve God too much?
How can you tell if a person is “serving God too much”?
9. The bible tells us that Martha was “distracted with much serving.”
Do you ever get distracted by things of lesser importance and overlook the more important things? Share your experience.
10. In Luke 10:41, how does Jesus refocus Martha’s perspective?
11. What is “that good portion” that Mary chose?
12. In today’s context, what would sitting at Jesus feet look like?

Get the Word into Your Life
13. What are the biggest distractions in your life right now that are keeping you from being all God wants you to be? What do you need to do about it?
14. What are your three greatest priorities today?
Do you think God is pleased with the priorities that you have?
15. Do you have a pattern or practice for spending time with God?
Is there anything you should do differently in the days ahead to improve your time “at his feet”?