Board games are great for entertainment and for bringing people together.

For Christian families and groups, Bible board games have the added benefit of introducing elements of biblical teaching or simply opening conversations about spiritual matters.

While Christian board games are fewer and harder to come by, here are some good ones that caught our attention.

For your convenience, this article contains links to the respective games. As an Amazon Associate, Bible Games Central receives a small commission for purchases made through these links. This is at no extra cost to you and allows us to continue developing new Bible games and lessons, available for free on our website. 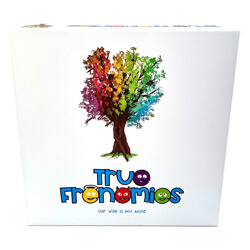 Review excerpt by Jonathan Nelson, Gaming Bits:
True Frenemies is a beautiful and fun game that teaches as well as entertains. The game doesn’t take a very long time to play. Most games sessions are only about an hour long. The components are very nice and look fantastic. The artwork is gorgeous and the pieces are great quality. It’s family friendly and one that everyone can enjoy. The questions aren’t overly difficult and the multiple choice answers makes it possible for everyone to have a chance at answering correctly. The game does spark some real conversations as players draw a Face the Music card in which they might have to tell the dumbest thing that they’ve ever done or you might have to explain why you’re actually one of the mean girls. Needless to say, you’ll be laughing out loud at some of the silliness. I do like how well the Bible scriptures have been worked into the various cards, as well as explaining the path to salvation by collecting submission tokens. In my opinion, this is one of the best Christian games on the market, if not THE best. I truly love how everything works together and how much fun the game really is. This is a game that I highly recommend checking out. It’s a fantastic game that my family and I have definitely enjoyed playing. I look forward to playing it a lot more. To learn more or purchase True Frenemies, click here.

Settlers of Canaan is an adaptation of the award winning Catan. It is set in the territory of Canaan and players represent various tribes of Israel that settled there during the Old Testament times.
The game progresses very much like Catan. Players collect resources – such as lumber, grain, stone, ore and wool – to build roads, settlements and cities, in order to gain victory points. The first player to accumulate 12 victory points wins.
There are some variations in line with the Biblical theme. Unlike Catan, the board for Settlers of Canaan is fixed to reflect the geographical features of the region. The plague replaces the robber, and priests replace knights. Instead of 2 special cards in Catan (Longest Road and Largest Army), Settlers of Canaan has 3: Longest Road, Most Priests and King’s Blessings. Players get the King’s Blessings card by contributing the most bricks toward the building of the wall of Jerusalem. There is a special copper hex on the board that is similar to the “gold hex” in some Catan expansions sets.

Bible Sequence is a strategy game, similar with the board game Sequence, with a Bible theme.
The Bible Sequence gameboard has an 8-by-8 grid. Each space on the grid has a picture of a Bible story; each picture appears on two separate spaces.
The Bible Sequence cards have these same matching pictures, together with story titles and Bible references.
Each player has 4 or 5 cards in your hand (depending on the number of players) and takes turns to discard one card at a time. As you discard each card, place one of your colored chip on a space with the matching picture on the gameboard, The first player to place five chips in a row wins the game.

This Bible board game, which is marketed as “The Hilarious Church Folk Party Game”, comes with 250 Playing Cards that are a mix of Bible-based questions and questions/jokes by/about church folks.
The game is played in 3 rounds.
In Round 1 “Trivia”, players must answer questions about “What Would Church Folk REALLY do” or about “Celebrity Church Folk” or Bible-based questions. For example, “In a national survey we asked everyday Church Folks, ‘What would you do if while going down for prayer after service you noticed that the person praying for you was in desparate need of a Tic Tac?’ What was the MOST popular response?”
In Round 2 “Performance”, players must draw or act out the given phrases, such as “Mountain on Fire” or “Stretch forth thy Hand”.
In Round 3 “Bible or Church Folks”, players must answer whether the given phrases are quoted from the Bible or church folks. For example, “God’s way or the highway”.
The team with the most correct answers win.

Watch Ya’ Mouth is a fun party board game, usually played in two teams. You need two components to play: Watch Ya’ Mouth Mouthpieces and Watch Ya’ Mouth Phrase Cards.
Teams take turns to send one player to put on a Mouthpiece (that resembles a mouth opener or cheek retractor used by dentists) and read out phrases from the Phrase Cards for their teammates to guess. The player not only looks but also sounds hilarious; everyone tries to contain their laughter as they try to guess the phrases. The team with the most correct answers wins.
The Bible Expansion Pack 1 contains 200 phrase cards, with phrases taken from the Bible as well as popular hymns and songs. Watch Ya’ Mouth Mouthpieces are sold separately.

Commissioned is one of the most highly recommended cooperative Bible-themed board games available. Although based on the first 150 years of Church history, players do not need to know anything about the Bible or Church history to play this game.
In Commissioned, players are Apostles who must work together to strengthen their Faith decks, grow the Church, collect the books of the New Testament, and overcome trials. There are five game scenarios to choose from, each with a different set of victory conditions. For instance, to win in the “Acts of the Apostles” scenario, players must have a church in every city and collect all nine New Testament Word Cards before five churches are extinguished or the Trial deck runs out.
This game is played in rounds, with players taking turns to be the group’s elder and making decisions that affect the entire team. At the beginning of each round, players first build up their Faith decks, then live out their faith through trials, praying, sharing, moving and growing, and finally mature through expanding their Faith decks.
Commissioned also comes with a Theme Appendix for those who are interested in learning about the game’s historical setting.

Kings of Israel, another popular cooperative Bible-themed board game, is based on the period when the nation of Israel was ruled by kings, starting from King Saul in approximately 1050 BC to the time the Northern Kingdom collapsed more than 300 years later. Although players do not need any knowledge about the Bible to play this game, it probably appeals more to those who are familiar with this period of Israel’s history.
In Kings of Israel, players are prophets who must build a specified number of altars (depending on the number of players) before Israel is destroyed or overrun by sin and idolatry. Players take turns to play, with each turn involving four phases: King’s Godliness, Sin Increases, Prophets Work and End of Round.

BibleOpoly is almost identical to the boardgame Monopoly, except that it is modified to the Bible theme.
In BibleOpoly, instead of a Banker, there is an Overseer; instead of collecting $200 when you pass “Go”, you receive 10 offerings each time you pass “In the Beginning”; instead of going to “Jail”, you go to “Meditation”; instead of buying properties, you become caretakers of cities by making the required offerings to the Overseer; and instead of building houses and hotels, you build churches. But there is a twist in BibleOpoly, where instead of purchasing cornerstones that are required to build churches, players must earn them through helping fellow players or doing “Community Service”. This Bible board game ends when one player successfully builds a church.

This Christian board game serves as conversation starter for family and friends to share their life experiences with each other. It comes with a simple gameboard and 4 corresponding decks of “LifeStories” Cards: “Memories” (people and events from your past), “Etchings” (outside influences on your life), “Valuables” (your thoughts, hopes and dreams) and “Alternatives” (an optional and often amusing choice).

Pharisees: The Party Game is a family-friendly card game comprising a set of 54 cards featuring 34 unique roles, such as Pharisee, Disciple, Judas, Esther, Magician, the Whale, Pharaoh, Lazarus and many more.
In this Bible card game, players live in a distant land, many centuries ago. Some have decided to become disciples of Jesus, but the religious leaders, i.e. Pharisees, are not happy about it. Pharisees try to secretly seek out one disciple to stone each night. Disciples try to identify and excommunicate the Pharisees before they all get stoned. There are special roles to help both disciples and Pharisees accomplish their missions.

In the Bible board game Portals and Prophets, players travel back in time to witness biblical events that took place in the land of Israel during the time of the kings and prophets.
Players take turns to play. During each turn, players may take up to four actions: draw card(s), move your pawn, or play card(s) from your hand. You score points for playing a card when your pawn is at the right place specified by the card and the time machine is set to the right time (or has enough fuel to get there). The game ends when any player plays their third New Testament Card.

Heavenly Treasures is a very simple Christian board game that is similar with the popular Chutes and Ladder game.
In Heavenly Treasures, players race to be the first to reach the “Street of Gold, Gate of Heaven”. Landing on spaces such as the “Narrow Path” move you ahead, while some other spaces such as “Pit Fall” set you back. In addition, in line with its Bible and character-building themes, you must draw a card when you land in a “Bible” space; if it’s a good character trait you move forward but if it’s bad, you move backward.

It’s All About That Grace

This Christian card game is based on the biblical teaching that the wages of sin is death, but by grace we can be saved.
There are 60 cards in total, comprising 12 Grace Cards, 7 Sin Cards, 20 Good Works Cards, 20 Action Cards and 1 Miracle Card.
Before the game begins, place 3 Grace Cards facing up in the middle. During the game, if you have 3 Good Works Cards, you can exchange them for one of these Grace Cards.
Each player has 5 cards to begin and take turns to play. During your turn, you can play as many cards (or none) as you like. If you play an action card, you must do what it says. Then end your turn by drawing a card from the Draw pile.
If you draw a Sin Card, you are out of the game unless you have a Grace Card to save you. The last player standing wins!

2 thoughts on “Bible Board Games” 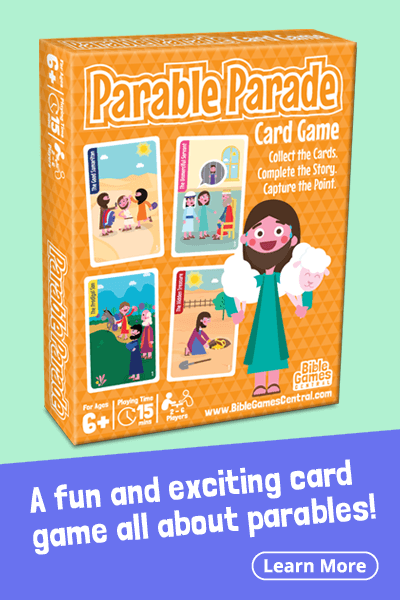 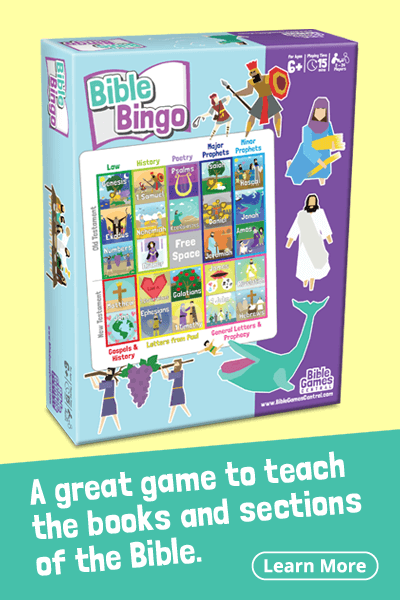 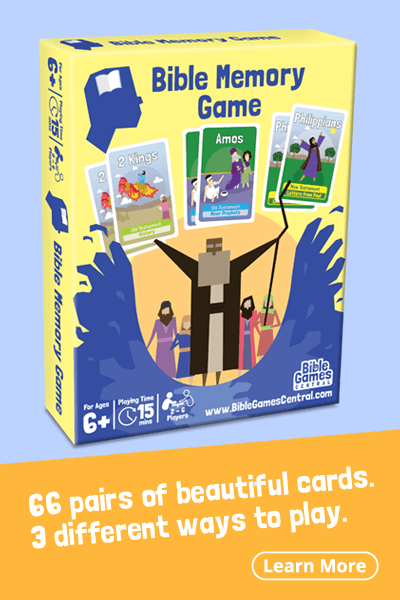 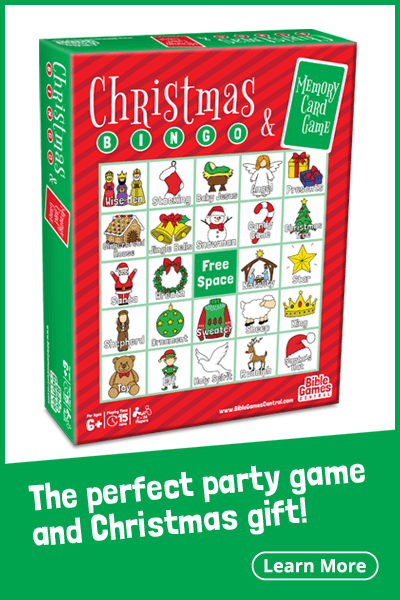