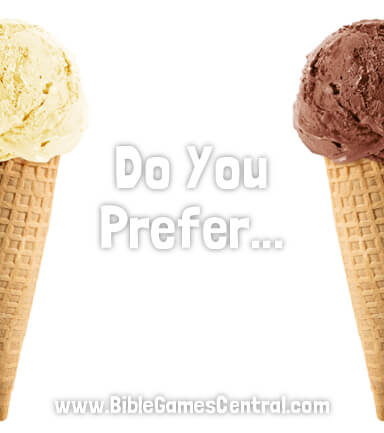 Do you prefer chocolate or vanilla? Summer or winter? Players choose their preferences by moving to either side of the room. Use this game to teach about peer pressure. 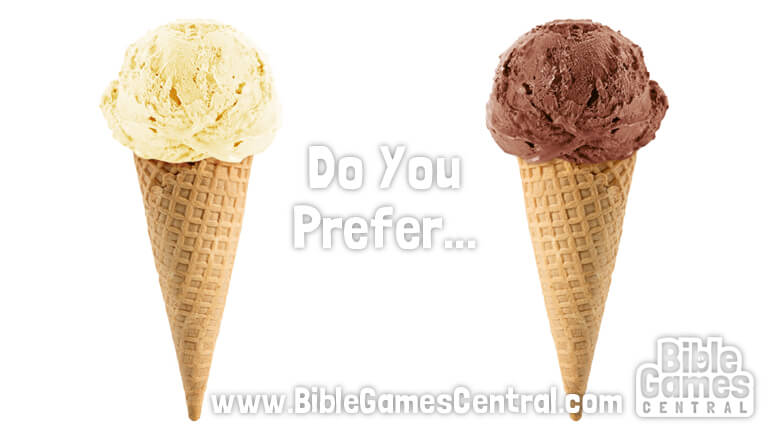 Download, print and cut up the Do You Prefer Cards.
You will need 1 copy per player. 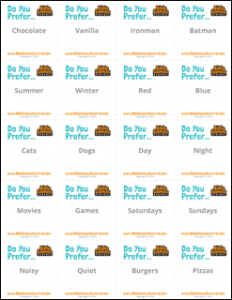 Ask the following “Do You Prefer…” questions one at a time:
– Chocolate or Vanilla
– Ironman or Batman
– Summer or Winter
– Red or Blue
– Cats or Dogs
– Day or Night
– Movies or Games
– Saturdays or Sundays
– Noisy or Quiet
– Burgers or Pizzas

After each question, players move to either the left or right side of the room, depending on their answers.
Give out the appropriate cards to each player accordingly.

After all 10 questions have been answered, players try to find another person with the exact same combination of cards.

Get Started
1. Did you have to think very hard for any of the 10 questions?
2. In deciding which side to move to, were you influenced by where others moved?

Get into the Word
Read Daniel 1:1-21
3. What was Nebuchadnezzar trying to do with these young men?
4. What was Ashpenaz trying to accomplish by changing the names of Daniel and his three friends?
5. Why was Daniel unwilling to eat the royal food?
6. What steps did Daniel take to provide an alternative to the king’s plan?
7. What do you think helped Daniel make such a stand?

Get the Word into your Life
10. How can we determine if the activities we engage in are pleasing to God?
11. What can we learn from Daniel about how to respond when our biblical values are challenged?
12. Have you ever been caught in a situation where you were pressured to do something you didn’t want to do? Tell us more.
13. What aspect of Daniel’s character or conduct impresses you the most?
14. How can you cultivate that same quality in your own life?

Discuss
1. Did you enjoy this game?
2. In deciding which side to move to, were you influenced by where others moved?
3. Have you ever been caught in a situation where your friends tried to make you do something that you didn’t want to do? Tell us more.
What did your friends want you to do?
Why didn’t you want to do it?
What happened in the end?
4. Do you remember any Bible passages that talk about something like this? Where someone was asked to do something he didn’t want to do?

Discuss
5. What did king Nebuchadnezzar want to do with these capable young men? (verses 4-5)
6. Why did Daniel refuse to eat the royal food and wine? (verse 8)

Discuss
7. What does verse 10 suggest to you about king Nebuchadnezzar?
Do you think refusing to eat the royal food was a brave thing to do?
8. What would you have done if you were in Daniel’s position?

Discuss
12. What do these verses tell us? Why is it important for us to obey God even if people around us do not agree with us?