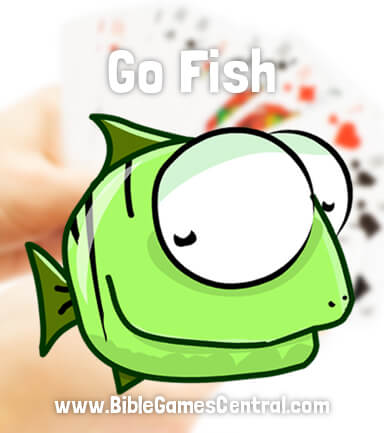 This popular card game can be used in lessons on evangelism and missions as well as to teach kindness. 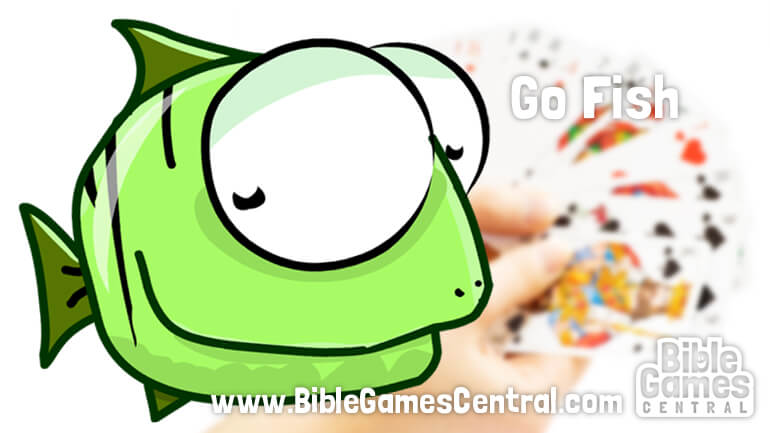 If you are playing using the Go Fish Card Game, follow the given rules.

If you are playing with a deck of playing cards, remove the jokers, shuffle and distribute the cards:
– For 2 to 4 players: 7 cards each
– For 5 or more players: 5 cards each
Spread out the remaining cards on the table (these are the fish in the ocean).

The objective of the game is to collect as many sets of cards as possible.
Each set comprises all 4 cards of the same rank.

Player 1 begins by asking any opponent (by name) for cards that he/she has in his own hand. For example, “Tom, please may I have your Kings?”

If the opponent (whom Player 1 asked) has one or more Kings cards in his hand,
– He/she must hand them all over to Player 1.
– Player 1 takes the cards and says, “Thank you”.
– Player 1 continues to ask any player for any card that he has in his own hand.

If the opponent (whom Player 1 asked) does not have any Kings in his hand, he says, “Go Fish!”
– Player 1 then draws a card from the “ocean”.
If the card drawn is one that he has just asked for (example, Kings) then Player 1 must show everyone the card. Player 1 continues to ask any player for any card that he has in his own hand.
If the card drawn is a different card, then Player 1’s turn ends. The turn passes to the person on the left of Player 1.
If there are no more cards in the “ocean”, the turn passes to the player on Player 1’s left.

Any time a player collects a complete set of 4 cards of the same rank, he must turn them face up in front of him.

If a player runs out of cards in his hand, he may, during his turn, draw one from the ocean and ask any player for that card’s rank.

If there are no more cards in the ocean, the game continues except for those players who have run out of cards in their hands.

The game ends when all 13 sets of cards have been collected.

The person with the most sets wins.

Discuss
1. Do you like this game? Why or why not?
2. Have you tried real fishing? Where did you fish? Did you catch anything? Do you like fishing?
3. Do you remember reading anything about fishing in the Bible? Tell us more.

Say
Many of Jesus’ followers were fishermen, so we do read about fishing in the Bible. But what is interesting is that in some of these passages, Jesus was not referring to fishing for fish but for something else. Let’s read one of these passages.

Say
Jesus said to Simon and Andrew, “Come, follow me, and I will send you out to fish for people.”
Jesus wanted Simon and Andrew to, first and foremost, follow him.
But that is not the end. After Simon and Andrew have become Jesus’ followers, Jesus wants them to go and bring other people to Jesus.

Conclude
Jesus loves us and he wants to have a relationship with us. At the same time, Jesus also loves all the people in the world. And he also wants to have a relationship with each of them.
Jesus wants us fish for people, to go tell others about him so that others can also believe in him. We can start by telling those close to us, but we should not stop there. God wants us to go and tell everyone, everywhere about Jesus.

Discuss
1. Do you like this game? Why or why not?
2. Do you normally say “please” and “thank you”? Does it come naturally to you, or do you feel awkward?
3. Do you have the habit of asking others for help when you need help? Why or why not?
4. How do you normally respond when others ask you for help? Tell us more.
5. What are simple ways that we can help others in need?

Discuss
11. Why is it important for us to show love and kindness to others?
12. How can we become a kinder and more loving person?

Conclude
God is loving and kind, and he is pleased when we show love and kindness to others. Saying “please” and “thank you” is a good start, but we must not stop there!
God helps us to be loving and kind. When we yield to the Holy Spirit, he, who lives in all of us who believe in Jesus, produces good fruit in our lives that please God.