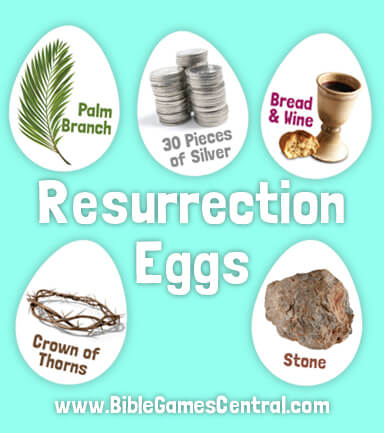 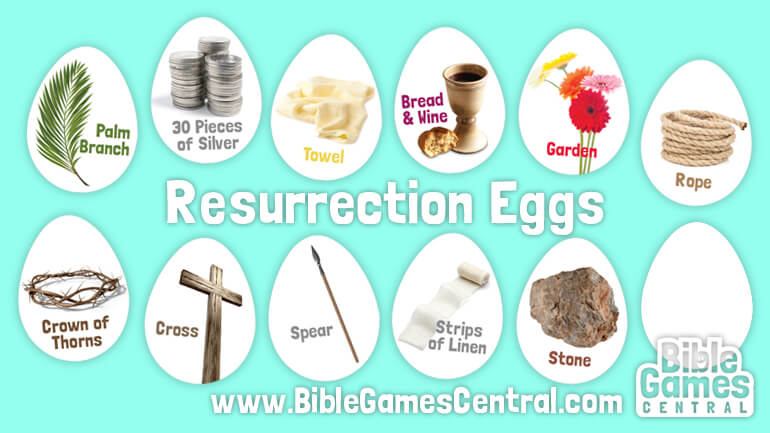 How To Make Your Own Resurrection Eggs 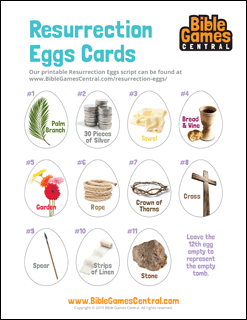 Download, print and cut up these egg-shaped Resurrection Eggs Cards.

Place the items listed below (or the egg-shaped Resurrection Eggs Card) in each plastic Easter egg.
Use a permanent marker to write the corresponding number on the outside of each egg.

Resurrection Egg #1
Any leaf to represent the palm branches that the people of Jerusalem spread on the road as they welcomed Jesus. You may like to cut the leaf to resemble a palm branch.

Resurrection Egg #3
A small piece of terry cloth to represent the towel that Jesus used to dry his disciples’ feet after he had washed them.

Resurrection Egg #4
A small communion cup to represent the last supper.
Alternatively, use a communion wafer or a small piece of bread.

Resurrection Egg #5
A flower to represent the Garden of Gethsemane, where Jesus went with his disciples to pray before he was arrested.

Resurrection Egg #6
A piece of string to represent the rope that was used to tie Jesus up when he was arrested.

Resurrection Egg #7
A small stem of any plant with thorns to represent the crown of thorns that the soldiers put on Jesus’ head as they mocked him.

Resurrection Egg #8
A small cross to represent the crucifixion of Jesus.
Alternatively, use 3 small nails.

Resurrection Egg #9
A toothpick with one tip dipped in red paint or nail polish to represent the spear used by the soldier to pierce Jesus’ side.

Resurrection Egg #10
A small strip of white cloth to represent the strips of linen used to wrap the body of Jesus before he was placed in a tomb.

Resurrection Egg #11
A small stone to represent the large stone placed in front of the entrance to Jesus’ tomb. 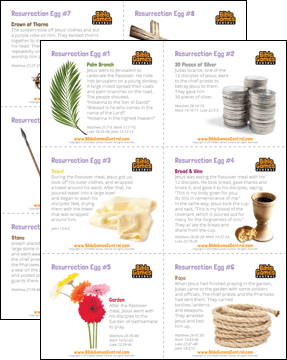 Each numbered card tells part of the Easter story that corresponds to the object or image inside the Resurrection Egg. 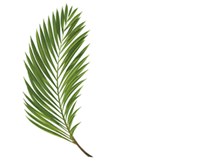 Jesus went to Jerusalem to celebrate the Passover. He rode into Jerusalem on a young donkey.
A large crowd spread their coats and palm branches on the road. The people shouted,
“Hosanna to the Son of David!”
“Blessed is he who comes in the name of the Lord!”
“Hosanna in the highest heaven!” 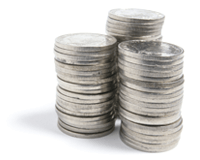 Judas Iscariot, one of the 12 disciples of Jesus, went to the chief priests to betray Jesus to them. They gave him 30 pieces of silver. 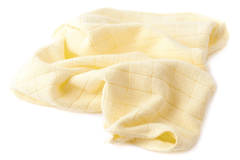 During the Passover meal, Jesus got up, took off his outer clothes, and wrapped a towel around his waist. After that, he poured water into a large bowl and began to wash his disciples’ feet, drying them with the towel that was wrapped around him. 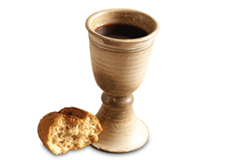 Jesus was eating the Passover meal with his 12 disciples. He took bread, gave thanks and broke it, and gave it to his disciples, saying, “This is my body given for you; do this in remembrance of me.” In the same way, Jesus took the cup and said, “This is my blood of the covenant, which is poured out for many for the forgiveness of sins.” They all ate the bread and drank from the cup. 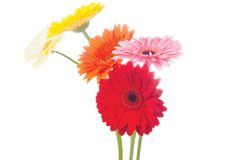 After the Passover meal, Jesus went with his disciples to the Garden of Gethsemane to pray. 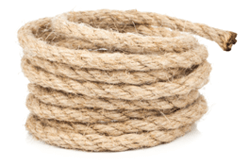 When Jesus had finished praying in the garden, Judas came to the garden with some soldiers and officials. The chief priests and the Pharisees had sent them. They carried torches, lanterns and weapons. They arrested Jesus and tied him up.

The soldiers took off Jesus’ clothes and put a purple robe on him. They twisted thorns together to make a crown and placed it on his head. Then they spit on him, hit him repeatedly on his head, and pretended to worship him as the king of the Jews. 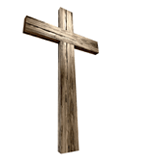 After they had finished mocking Jesus, the soldiers took Jesus to the place called Golgotha and nailed him to a cross.

After Jesus’ crucifixion, one of the soldiers pierced Jesus’ side with a spear before his body was taken down from the cross. 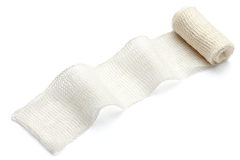 A man named Joseph approached Pilate to ask for the body of Jesus. Joseph wrapped the body in spices and strips of linen, then placed it in a new tomb cut out of the rock. 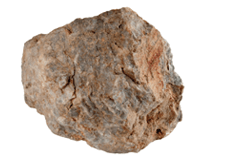 Joseph placed Jesus in a tomb, rolled a large stone in front of the entrance and went away. Later, the chief priests and the Pharisees put a seal on the stone and posted some guards there.

Resurrection Egg #12 – Empty
On the third day after Jesus’ crucifixion, the women brought spices to the tomb to anoint Jesus’ body. But they saw that the stone in front of Jesus’ tomb had been rolled away and the body of Jesus was not there. An angel told them, “Jesus is not here; he has risen from the dead!”

Play a memory game with 2 sets of Resurrection Eggs.

Supplies and Set-up:
Prepare 2 sets of unnumbered Resurrection Eggs.
See section above on “How to Make Your Own Resurrection Eggs” but do not write the numbers on the outside of the eggs. Ensure that the plastic Easter eggs are opaque.

How to Play:
Mix up all 24 opaque, unnumbered eggs and place them on a table.

Players take turns to open any two eggs.
If the eggs contain identical objects, you may keep these two eggs and open another two eggs.
Otherwise put the objects back inside the eggs and the turn passes to the next player.

Continue playing until there are no more eggs on the table.
The player who has the most Resurrection Eggs wins.

Players must rearrange Resurrection Eggs and place them in their correct order. But each player can only look inside 2 eggs at a time.

Supplies and Set-up:
Divide into teams of 2-6 players per team.
(Teams can be larger, but smaller teams allow everyone to be involved.)

How to Play:
Have the players stand at the opposite end of the room.
On “go”, each team sends 1 player to look inside any 2 Resurrection Eggs.
The player then rearranges the eggs to try to get them in their correct order.
When done, the player returns to other end of the room and the next player goes.

When a team is confident all their eggs are in the correct order, they must all raise their hands and shout “Happy Easter!”
The game master then checks their Resurrection Eggs.
If the order is incorrect, the team must continue playing.

The game ends when all the teams’ eggs are in the correct order.

Variation for Younger Children:
For younger children, gather the players around the eggs to play.
You may also want to provide each team with this printable Resurrection Eggs Order. 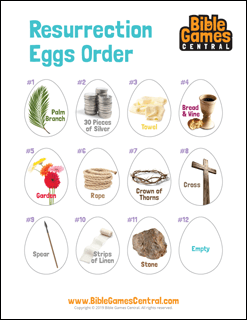 The Resurrection Eggs Word Search can help children remember the story of Easter. 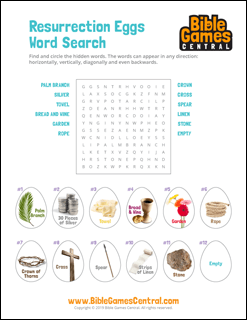 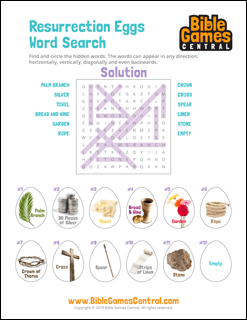 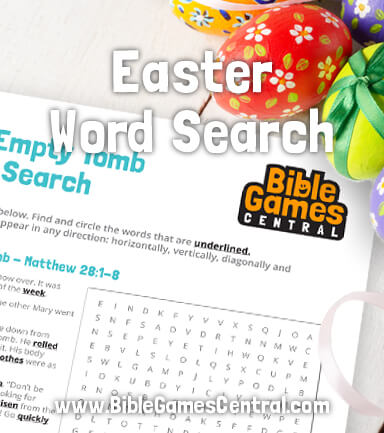 Be sure to check out our Easter Word Search puzzles. This collection of printable word search puzzles are based on Biblical accounts of events leading to Jesus death and resurrection. Solutions to each Easter word search are provided.

How to Play:
The eggs are numbered 1 to 12.
Players can only pick up one egg of each number.

Award Prizes for:
First player to find a complete set of 12 Resurrection Eggs.

Variation for Cooperative Play:
Play in the same way as above except there is only 1 set of Resurrection Eggs hidden, and everyone must work as a team to find all 12 hidden eggs within a given time.

Players take turns to run to the opposite end of the playing area to sequentially pick up one Resurrection Egg at a time using a spoon. They must then walk back and place the egg in a row before passing the spoon to the next player. The first team to transfer all 12 Resurrection Eggs wins.

Supplies and Set-up:
Divide players into 2 or more teams. Each team should have not more than 12 players.
Prepare 1 set of Resurrection Eggs per team.
See section above on “How to Make Your Own Resurrection Eggs”.

Each team stands in a line. Give the first player of each team a spoon.
At the opposite end, facing each team, place a basket containing a set of 12 Resurrection Eggs numbered 1 to 12.
(1 basket for each team.)

Players cannot touch the eggs with their hands.
They can only use their spoons to hold the eggs.

If an egg drops, pick it up.
Continue playing from where you dropped the egg.

The first team to sequentially transfer all 12 Resurrection Eggs and arrange them in the correct order wins.

For Younger Players:
Use bowls, cups or hands instead of spoons. 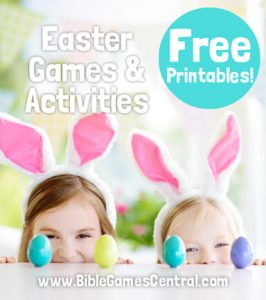 Planning an Easter celebration at home or in church? Check out our other Easter Games and Activities that will surely add an energetic buzz to the occasion.

Say
Although Easter eggs are not mentioned in the Bible, they are used by Christians around the world to symbolize the empty tomb of Jesus. Every year on Easter Sunday, we remember and celebrate the resurrection of Jesus.

Say
Yes, Jesus was crucified and died on the cross.
But Jesus did not remain dead for long. Jesus became alive again after 3 days!

Discuss
9. Were the women (in Matthew 28:1-10) the only ones who saw Jesus after his resurrection?

Conclude
The women went to the tomb to anoint the body of Jesus with the spices they had prepared. But the body of Jesus was not in the tomb. The angel explained to them that Jesus had risen from the dead. Jesus is alive!
Jesus is the Son of God. He came to earth to die on the cross to take the punishment for our sins. And on the third day, Jesus became alive again.
Because Jesus died on the cross, our sins can be forgiven. We can be with God and have a relationship with him. We can become his children and will one day be with him in heaven.

Easter is a great time to share the message of salvation. As you celebrate the resurrection of Jesus, consider giving out unique Easter tracts such as The Lost Easter Egg Pop-up Tract during your Easter lesson, event or party. These Easter tracts feature clever pop-ups which tell the story of 3 children in search of a lost Easter egg. The 3 friends really, really want to find the lost Easter egg, just as God really, really wants to be with each one of us. 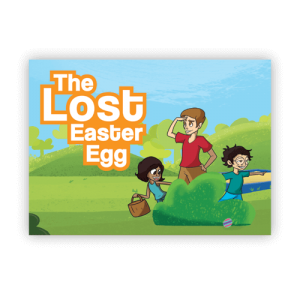 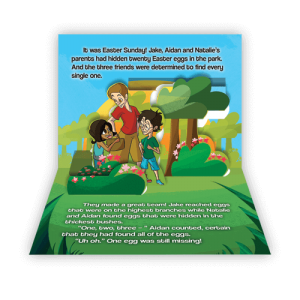